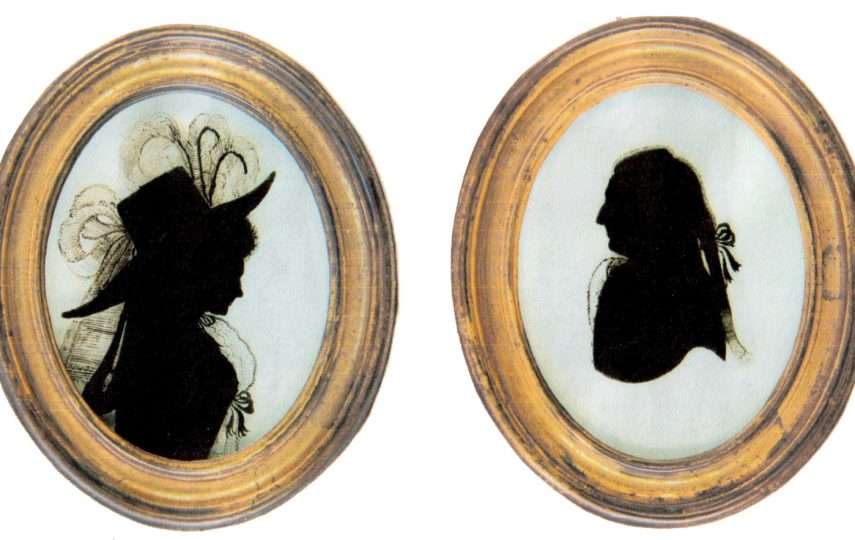 Who on earth was Mrs Ames? It’s a good question. Considering that only one pair of silhouettes painted by her has ever been identified, researchers have written a surprising amount about this artist (or artists).

Being curious about Mrs Ames I run some of my virtual studio days in tribute to this artist. The next will be on Thursday 13th May 2021.

Mrs Ames painted her only known pair of elaborate Georgian silhouettes onto flat, oval glass using enamel paint. She then placed each glass oval over a pale green gesso backing and put them inside oval frames. Both are backed with a boastful, printed trade label claiming that her “mode is superior to any other yet attempted in any Kingdom”

Where are all Mrs Ames’ silhouettes?

Perhaps it was, these are unquestionably beautiful silhouettes, but where is the rest of her work? Both the style painting and the label seem to indicate a professional artist of many years experience. This is the main reason there has been so much speculation about her.

In her label on the back, Mrs Ames writes that she made silhouettes of many royal and important people, including Prince William Henry in Cork. She adds that her sitting time is one minute and that her silhouettes cost between 9s 9d and £1 2s 9d.  The silhouettes are undated but seem likely to be from the late 1780s or 90s. 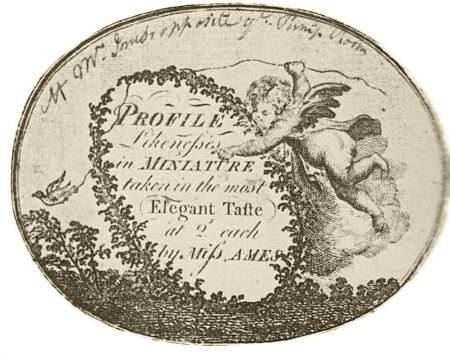 A lone label used by Miss Ames, now sadly divorced from its silhouette

The British Museum has a copy of a trade label bu a Mis Ames, sadly without it’s silhouette. It still bears the handwritten name of the sitter and says it was taken opposite the Pump Room in Bath in 1784. The label states the Miss Ames will take your likeness in the most elegant taste for 2s, far cheaper than the two Mrs Ames silhouettes illustrated above. Is this the same artist?

Apart from these two trade labels, there’s a single advertisement placed by Mrs Ames in the Birmingham Gazette in 1785.  This states that her silhouettes cost between 2s and 5s, the higher price being for her silhouettes painted on glass. These are also much cheaper, but the “Mrs” and the reference to painting on glass both indicate that this is the same artist.

These silhouettes leave us with more questions than answers. Were Miss and Mrs Ames the same person? Did she marry and then keep and keep using her maiden name for her profession? Where are the rest of her silhouettes? 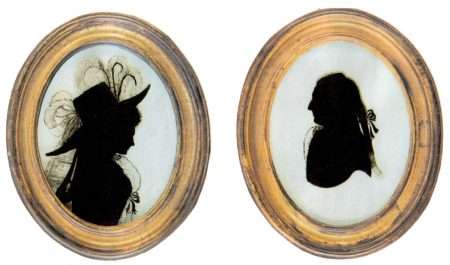 The only known pair of silhouettes by Mrs Ames. These are painted on glass.

Collectors and authors are divided on these issues. Personally I incline to the view that they are the same artist and that her widely varying prices either reflected a desire to test the market, or that her prices rose later in her career. In seems likely that the Miss Ames label is earlier than the Mrs Ames label.

I also suspect that early in her career she offered client s the choice of painting on paper (the 2s profiles) or on glass (the 5s profiles). Later on she may have abandoned the paper silhouettes to focus on her more profitable work on glass. Sadly, silhouettes painted on glass are notoriously fragile, so it’s possible that the rest of work is simply broken. All of this is speculation on my part, as nothing can be proven without sight of more of her work.

Previous: « Cut during lockdown: silhouette cutting as a Christmas gift experience
Next: Audax: the long-distance silhouettist? »