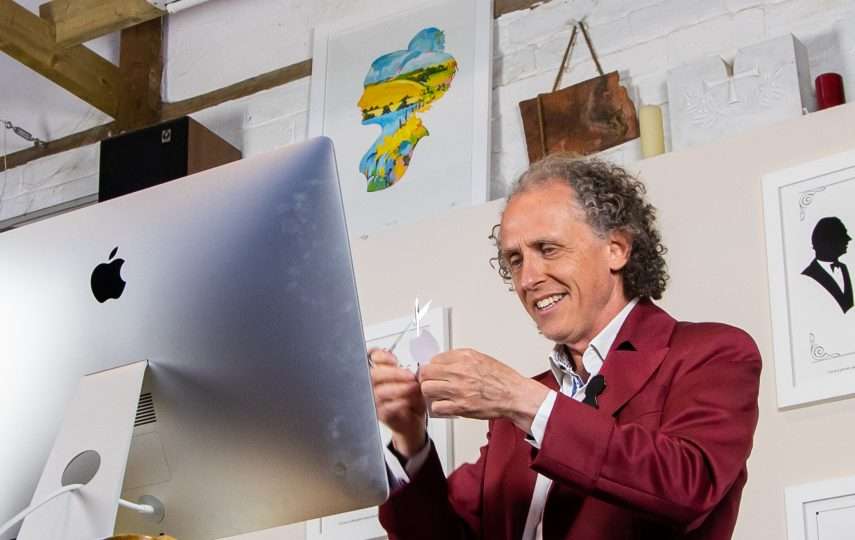 I held four studio days in September. In order, they were named after:

Miss Alcock RA: who on earth was she?

Miss Alcock is only known through four well-painted silhouettes, dated 1816 and 1817, of relatively fine quality.

Apart from that we know very little about her.

Her (or possibly his) work has previously been confused with that of contemporary artists with very similar names, both male and female.

However, recent research has definitively proved that the artist who made the silhouettes dated 1816/17 is a unique artist.

In the early 1830s there is a record that a Miss Alcock exhibited at the Royal Academy. So it’s possible that silhouettes were a passing phase in her life before she moved on to other forms of painting.

However, it’s equally possible these are two different artists; the date of birth she submitted to the RA would have made her a small child in 1816! Perhaps she shaved a few years off her age?

Aldous: silhouettist to the Duke of York

We know very little about W. Aldous. Of course, this is not unusual for silhouettists, they often seem to disappear into a shadow of their own making. What is less usual is that he’s only known to have ever made one silhouette!

W. Aldous (nobody knows what the ‘W’ stands for) was primarily a painter of portraits, a miniaturist and an engraver. His sole silhouette was a portrait of Prince Frederick, the Duke of York, which the artist made into a print and circulated after the Duke’s death in 1827.

For a man who only ever made one silhouette he certainly knew how to market it!

Aldous exhibited some portraits at the Royal Academy between 1824 and 1827, although none survive.

Prince Frederick’s silhouette appears to be painted, with a white collar and otters details added afterwards in white paint. It looks like the work of a professional silhouettist with a defined style and some experience.

However, no other evidence of his career as a silhouettist has ever been found.

I’d love to show you a whole gallery of silhouettes by the Irish artist Allenby, but as far as I know nobody has ever seen one!

The only record that he ever lived and worked as a silhouettist comes from two advertisements printed in the Limerick Chronicle in 1840. The first, in June of that year, claims that he’d been making silhouettes for the past thirty three years,.

That’s longer than I’ve been making silhouettes! It indicates a working career beginning in 1807, at the height of the turn-of-the-century ‘craze’ for silhouettes. Allenby’s advertisements also claim that his rooms in various London venues had been crowded with sitters throughout his career. This at least tells us that he worked in England for a while. What it doesn’t tell us is what happened to all his silhouettes!

One explanation is that Allenby never signed his silhouettes, thus making them difficult to attribute and almost worthless. His advertisements indicate that he used “a newly invented Patent Machine” to produce his silhouettes mechanically. There were many such machines in use in the early nineteenth century. They were all designed to produce silhouettes quickly and cheaply so that everybody could afford one.

Have you ever come across a 200-year-old silhouette signed ‘Allenby? If so, do please get in touch.

The German silhouettist Hans Allmayer worked during the early twentieth Century. He is best known for making silhouettes of classical German composers. These were then produced as a successful series of printed postcards in the 1920s.

I first became aware of his work via these postcards. To judge by the number of them which turn up on eBay, they sold well at the time.

The illustrated silhouette is a hand-cut portrait, although presumably not cut from life. I don’t know if Hans Allmayer ever cut live silhouettes of real people. If he did, I’ve not seen one. He seems to have focussed his portraits on these composers, whom he presumably cut from portraits painted during their lifetime.

His daughter Josefine carried on the family tradition, becoming an accomplished paper-cutting artist. The Kierling Museum in Germany has a collection of both their work, which is presumably where they lived.