WHEN GOOGLING “Audax” all you’ll find is information about long-distance cycle racing. However, Audax was also a silhouettist with a career spanning over 40 years. This is why I refer to him as the long-distance silhouettist!

As an avid collector of his work I run a number of my virtual studio days in tribute to this artist.

As an ex street artist I’m fascinated by artists like Audax. He (and I’m assuming ‘he’) was a European silhouettist who worked all over Europe, and later in Argentina, from the early 1900s until the late 1940s.

For somebody with such a long career it’s surprisingly hard to find out anything about him. Was “Audax” his real name, or a nom de ciseaux?

The little I know comes solely from his silhouettes and their various backing cards. Usually, these just include a signature or stamp. However, they occasionally carry details of the location or event where he was working.

I’ve no idea what he was doing between those dates. Did he come back to silhouette cutting later in life, or did he make thousands of unsigned and unidentifiable silhouettes for the bulk of his career? Sadly, this would be typical of the period; many street artists had the habit of not labelling their work in any way.

His career as an artist

Audax clearly worked as a street silhouettist at various European seaside resorts during the 1900s. His career, like those of so many other artists, was presumably interrupted by the outbreak of war in 1914. Did he travel to South America then, to escape the destruction, or perhaps migrated there afterwards? Or perhaps his trip to Argentina was a one-off event in 1947, especially to cut silhouettes during this special exhibition.

A collection of postcard silhouettes

Audax silhouettes are all freehand scissor-cuts mounted onto blank postcards. I think he worked fast as the quality of his work varies considerably. His earlier silhouettes seem smaller and neater than his later ones, and are sometimes cut in half length. The later silhouettes often have quite thick eyelashes with blunt ends, and sometimes include collar lashes for the men. The eyelashes could be a way to attribute an unsigned Audax silhouette, but I’ve never seen one which could be a candidate. 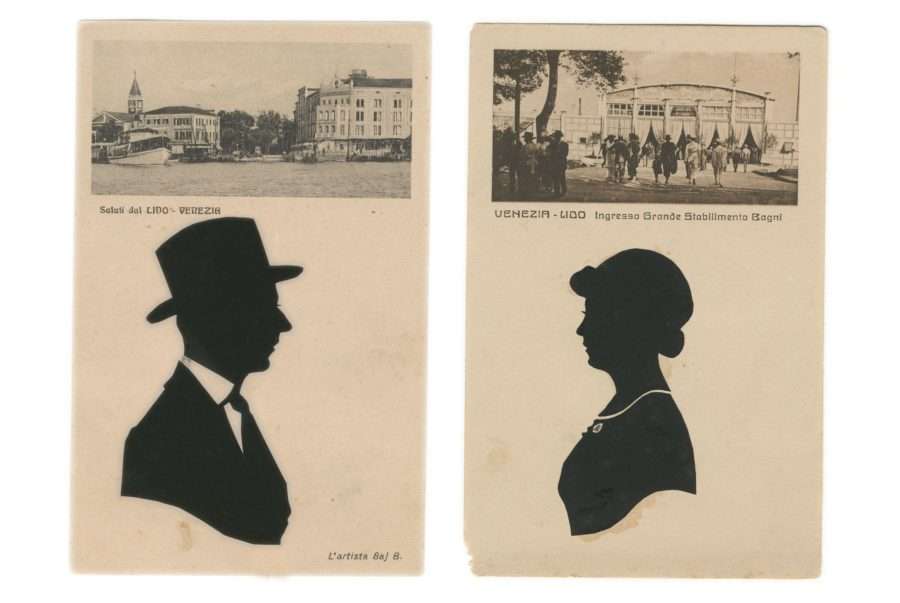 BAJ B. IS ONE of my favourite silhouettists. I’ve learned a lot from looking at the best of their silhouettes (I’ve no idea whether Baj…