Watching the news of Russian forces rolling into Ukraine a fortnight ago I was embarrassed to realise just how little I knew about the country. I had to look it up on a map! What’s the history, I wondered. Why is this happening? I found I knew almost nothing about either Ukrainian culture or history.

Listening to so many horrific reports quickly began to take an emotional toll. I switched the news off and, out of curiosity, began to wonder if there have ever been any Ukrainian silhouettists? For me, silhouettes can provide a unique window into other cultures. They give me a connection, something I can understand and relate to. If I could find some, I was hoping they might help me understand what was going on.

I was surprised and delighted to find at least two sets of Ukrainian silhouettes hiding in my own collection!

Silhouettes from Kyiv and Odessa

I say “hiding” because in my ignorance I had mis-labelled them as Russian. I’ve collected a number of silhouettes with Russian-seeming labels, but as I couldn’t read the script it was hard to find out much about them. I put them in an envelope marked “Russian” and thought little more about them.

I brought them out and did what I could to translate the labels. Here’s what I found.

I’d like to introduce a couple of artists whose names I don’t know. It’s possible they are the same artist, but as most their silhouettes are unsigned it’s hard to be sure. One of them had the habit of embellishing their silhouettes with elaborate initials, together with the place and date of cutting. The first time I saw this I thought the initials were those of the artist; but soon other examples turned up, clearly by the same artist but with different initials. It follows that these are the initials of the sitter (perhaps added for an extra fee) and that the silhouettes are unsigned.

I’ve seen a number of these silhouettes dating from the late 1940s to the mid 1960s, so the artist was working for some time. The labels tell me the artist worked in both Kyiv and Odessa in Ukraine, as well as Kislovodsk and Sochi in Southern Russia (just north of Georgia). This was the era of the USSR and the People’s Republic of Ukraine (URSR) was firmly under this umbrella.

The silhouettes are cut in typical street-art style, some with details added in ink. I imagine (but cannot prove) that the Odessa and Sochi silhouettes were made in the summer-holiday season near the beaches of the Black Sea. Those in Kyiv were likely made as souvenirs of visits to the Golden domes of that beautiful city.

Who is the artist? Cut near Kyiv University Metro Station

I’ve no idea to what extent holiday making and tourism were a feature of life in the USSR, but the the fact that silhouettists could make a living this way tells me it did exist. Another artist (or possibly the same artist working a few years later) did sign their silhouettes, but not in a manner I can read. Can you help me decipher it?

The silhouettes are all mounted on folding cards, each with a popular view of Ukraine on the cover. They’re all signed the same way, which tells me this is the artist’s signature rather than the name of the sitter.

Can you help me read the artist’s signature? I’m guessing … Ulebrenno or … Ulebrenna, but I don’t know if this is a Ukrainian name or not. Click on the image to enlarge it.

The back of the cards have a label in Russian which I translated with the help of Google. The cover just says “A Souvenir of Kyiv” while the back says the card was published by the State Publishing House of Fine Art & Music of the URSR, priced 2 kopek. The engraving of the University Metro Station is by an artist called KS Kozlovsky, but this is not the name of the silhouettist who I imagine was simply using these cards as an attractive and economical way to mount their silhouettes.

Other cards show on the cover a memorial to the nineteenth-century Ukrainian poet Taras Shevchenko, who played a leading role in a burgeoning movement for Ukrainian independence, Shevchenko has the curious distinction of having statues erected in his memory both by the Soviets in Ukraine as well as by the Americans in Washington DC. Both cultures regarded him as a hero!

Kyiv University (and hence the Metro station) is named after the same poet.

A pair of silhouettes from Odessa

I bought the above pair of Odessa silhouettes just a few months ago from an eBay seller in Kyiv. I do hope he’s OK! Only one is inscribed, so I can’t really be sure these are a pair, but they arrived together so I keep them together. Stylistically they each resemble both the artists above, which is why I wonder if they are the same artist. Both silhouettes are damaged, but I really like these classic Ukrainian profiles, especially that of the man. With his long white shirt and imposing brow, he looks like somebody you wouldn’t want o mess with!

Winding the clock back another 40 years or so, I’d like to introduce you to the silhouettist K. Smejkal. Over the years I’ve collected a number of silhouettes by Smejkal from different sources, all of which were cut in Kyiv in 1913.

The label under each silhouette indicates they were cut at the Ukraine All-Russian Exhibition which took place that year in Kyiv. A second label on the back reads: “K. Smejkal, Silhouettiste Artistique, Prague”

These silhouettes are clearly cut by a proficient silhouettist of many years experience, yet I’ve never seen any other labelled silhouette by Smejkal. The label on the back indicates he was based in Prague, yet his use of French indicates he probably worked all over Europe.

This was the age of the “Grand Tour”. People were fond of travelling from city to city across Europe in what seemed, just prior to the First World War, like an age of unbreakable European peace. Ukraine at the time was part of the Imperial Russian Empire, whose Royal family had connections all over Europe. Moscow itself was then considered a European city.

The All-Russian Exhibition took place in Kyiv from May to October 1913. I haven’t been able to find much out about it; Wikipedia (at least the English language version) is silent on the subject. Yet I know that many European capital cities held large “Expositions” during the first part of the twentieth century. A poster for the exhibition gives information in both Russian and French, making the international nature of the event clear. It would have included pavilions devoted to art, science, literature and Ukrainian culture.

Many of these grand European Expositions had silhouette artists working at them. As the contract would have been substantial it was worthwhile for the artist to print a card for mounting their silhouettes. Therefore, it’s not unusual to find silhouettes on exhibition cards by artists who otherwise remain invisible. It simply means that the rest of the time Smejkal mounted his silhouettes on plain, unsigned cards. This is shame, as his work was clearly excellent.

Silhouettes artists today are all connected by social media. I do follow a number of Russian silhouettists, one of whom @siluetistka I now realise is based in Odessa, Ukraine. The name on their their Instagram profile, Художник-силуэтист, just translates as “Silhouette Artist” which isn’t very helpful.

Their last post (a silhouette which looks unnervingly like a younger version of me) is dated July 2019, so clearly they’re even worse than I am at keeping up to date on social media! Sadly, the website on the silhouette card is currently down, so I haven’t been able to discover anything else about them or find out if they’re OK.

What do these silhouettes tell me?

It would be optimistic to expect too much from this collection of obscure Ukrainian silhouettes. However, the very fact that the majority of what I assumed to be Russian silhouettes are in fact Ukrainian does tell me something. Silhouettes have always been a European art and these silhouettes point to a country with deep cultural connections to both Russia and Europe.

From a European silhouettist working at the All-Russian Exhibtion in Kyiv to local silhouettists working around the Black Sea in both Ukraine and Russia, the latter referencing monuments to a well-know Ukrainian poet. Ukraine seems to look both East and West simultaneously.

To me, this understanding seems to imbue the atrocities currently being committed by Russian troops in Ukraine with an even greater sense of tragedy. It has some of the feeling of a civil war: people who were so recently neighbours and good friends suddenly finding themselves as enemies.

It’s hard to know what a silhouettist can do to help. Of course, I can always cut a silhouette or two and am happy to do so if it helps to raise funds. I’ve begun by offering the original silhouette of the Ukrainian harp (used at the e top of this article) as part of the #ukrainesupportpledge on Instagram. You can message me from my Ukrainian Harp post if you’d like to buy it! 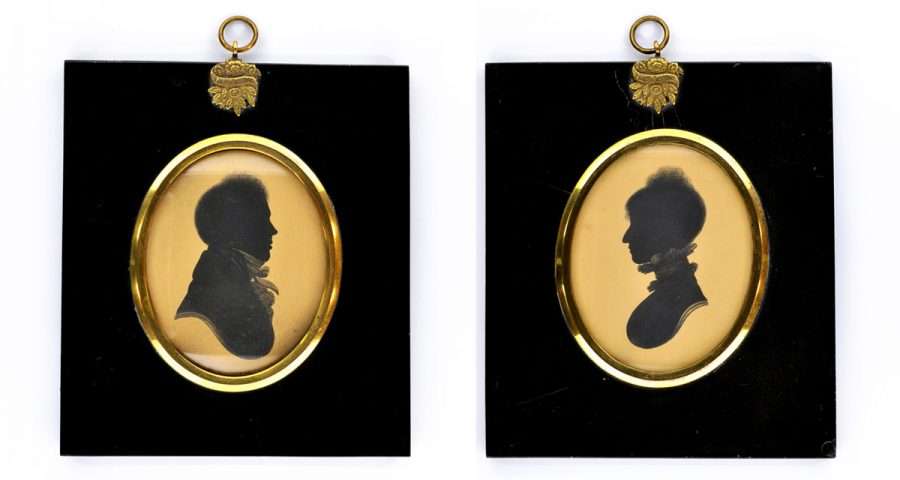 Thank you to all those who replied by email to suggest the artist’s signature above reads “Shevchenko”. That certainly sounds right!

This is such a brilliant post. It was so interesting and I loved your honesty throughout. Made it so relatable. Amazing to see the older silhouettes too.

Thanks Deb. I’ve learned so much over the years from studying older silhouettes like these.