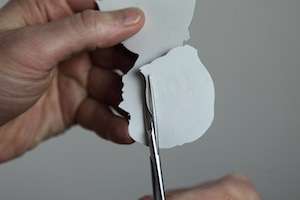 I get the impression they’re expecting to hear that I use at least six pairs a night! When I explain that I’ve been using the same pair of scissors for the last ten years, it’s often quite a surprise! Cutting a pre-drawn studio silhouette with my old favourite scissors, now sadly missed. One of the illustrations from Mastering Silhouettes. Previous: « Sent to publisher
Next: The Book is Launched! »