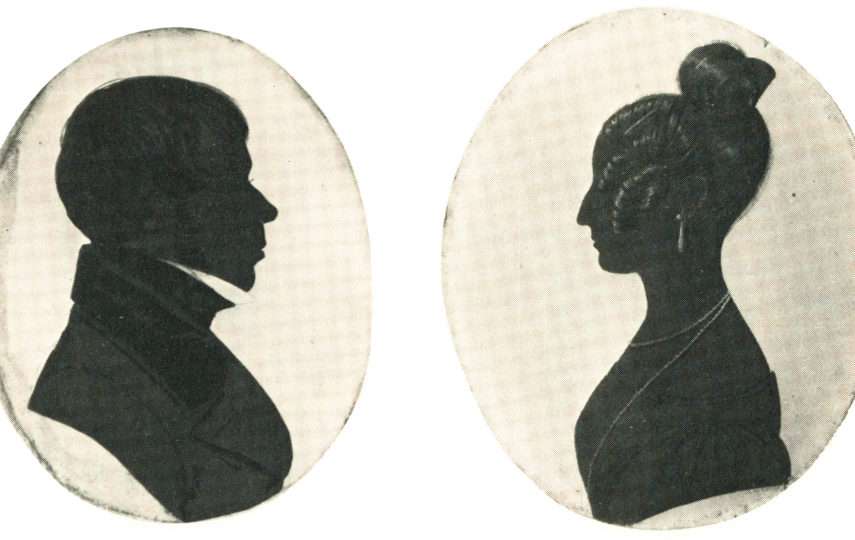 As an artist interested in science I’m aways fascinated by weird pseudo-scientific ideas of the past, especially if they involve silhouettes. Once which caught my eye recently is the Prosopographus.

As a fan of Prosopographus I run some of my virtual studio days in tribute to this artist. The most recent was on Sunday 18th July 2021.

In this post I’m going to take you back in time to see if it can be brought back to life. I’m looking for ideas to help me design a silhouette machine.

I’m going to take you back exactly 200 years.

At the end of 1819, just before the dawn of the 1820s, a silhouettist called Charles Hervé was pondering the ever-expanding craze in silhouettes (or “shades” as they were then known). He was wondering if he could automate the process.

I’m reminded of this when people ask if I worry that somebody might invent a smartphone app to make silhouettes faster and better than I do. This question has come up a few times already during this busy Xmas event season. I reply that I’m not in the least concerned because it’s already been done: Charles Hervé did it 200 years ago!

He didn’t, of course, invent a smartphone app (had he done so Hervé would now be a household name). Instead, he invented an automaton.

Automata were all the rage at the time: complex mechanical contraptions which appeared to perform complicated tasks all on their own. Charles called his machine “Prosopographus” and advertised that:

“The Public will probably be startled when it is stated that a Lifeless Machine is endowed by mechanical powers to draw likenesses of the Human Countenance… it not only traces an outline in less than one minute, but actually produces more perfect resemblances than any living artist could possibly execute…”

Sadly, no illustration or working diagram of this impossible machine has survived. i read a description of a small figure seated on a large box, or table. In one hand it held a tablet, and in the other a stylus. An operator placed a sheet of paper onto the tablet, onto which Prosopographus then traced the outline of the sitter’s profile.

Prosopographus was a huge success. operating from a shop at 161 Strand, London throughout the 1820s, and making Mr Hervé into a wealthy man. It cut thousands of silhouettes, many of which survive. They vary in quality from rubbish to rather good; some are even embellished with white and gold paint (see illustration at top). 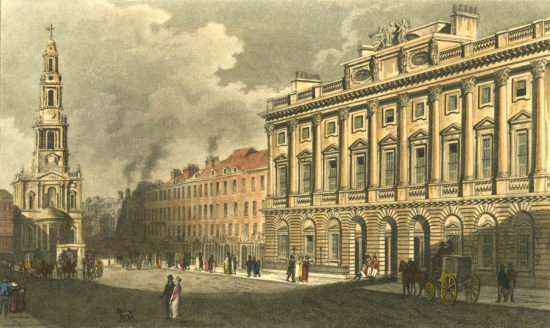 Strand, London, just before the dawn of the 1820s

The only clue to the mechanism comes from a published eye-witness account of the time, which reports seeing a human eye peering out from an opening in a curtain. Was Prosopographus a scientific fraud? Did the table simply hide an artist, seated underneath with a pocketful of paper and a pair of scissors?

If so, I could’ve been that artist, I can visualise exactly what they were doing. I think Prosopgraphus was a kind of fairground attraction. It lured people in with an impossible claim, and sent them away happily holding their automaton silhouette. It’s possible that many people saw through the disguise, but went along anyway because it was fun and because Charles Hervé was a talented silhouettist. 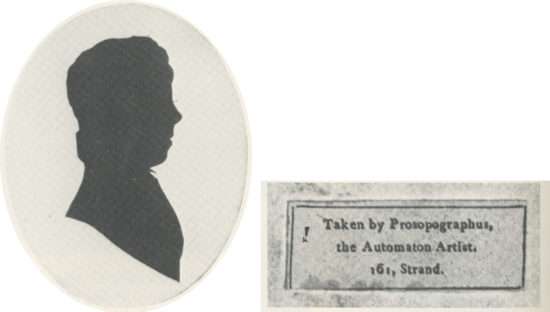 A plain Prosopographus silhouette together with it’s label

This got me thinking: in this 200-anniversary year could it be time to revive Prosopographus? How would a modern audience react to such a machine?

At first, I was put off by the lack of any drawing or illustration. On reflection, however, I realised this could be an advantage. It leaves me free to redesign Prosopographus from scratch, to create a version more suited to the 2020s. I’m dreaming the very best of steam-punk inspired confabulations, the only prerequisite being the inclusion of a tablet and stylus. What should it look like?

Which brings me to my election-day distraction.

If, like me, you’ve had enough of politics I invite you to focus your mind on Prosopographus instead. Please sketch on paper (or tablet if you prefer) the image which first comes to mind. What do think it should look like? Will the public of the 2020s enjoy it?

Feel free to sketch in as much or as little detail as you like. In the New Year I’ll pick a few out and work the most promising ideas into a design. Note that I’m not expecting you to draw a machine which actually works, so please let your imagination go wild! 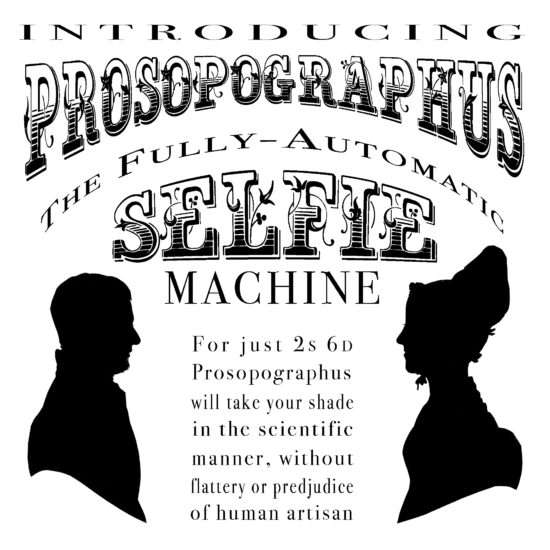 Here are a few thoughts I had on publicity for Prosopographus
“Fully automatic” is a bit of an exaggeration.

I’ll describe my Prosopgraphus as the nineteenth-century selfie machine. I’m hoping to build and launch it sometime in 2020. I’m planning to offer anybody who sends me a truly inspiring sketch a chance to showcase Prosopgraphus 2020 at an event of their choice. So, if the idea tickles your fancy, please do get involved.

Could this be you? Do you have occasion to plan such an event?

Lend me your thoughts below.

4 comments on “Prosopographus: the silhouette automaton”