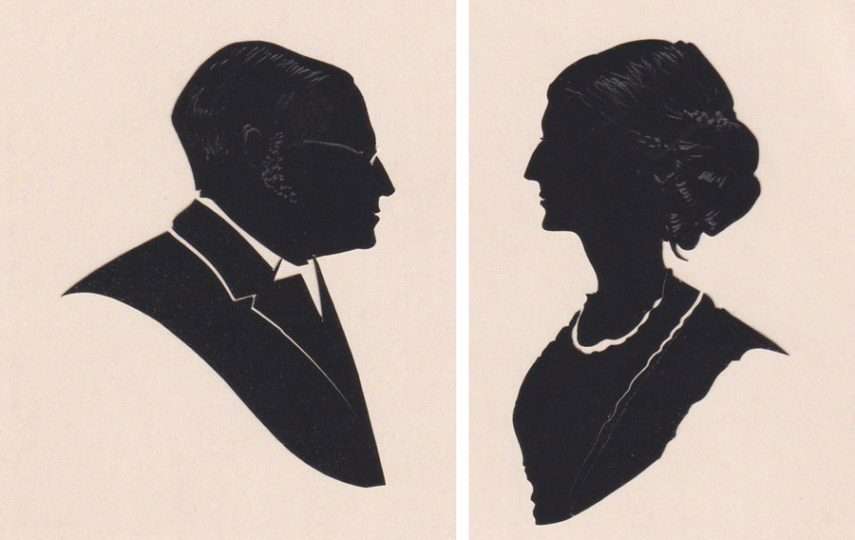 The English silhouettistte April Fielding (her description, not mine) is a shadowy character. Until this month, I didn’t even know her name! I only recognised a series of very fine postcard silhouettes, made in the 1900s, embedded in graphite and initialled “AF”.

As a fan of April Fielding I run some of my virtual studio days in tribute to this artist. The last was on 1st April 2021.

The mysterious artist with the AF monogram 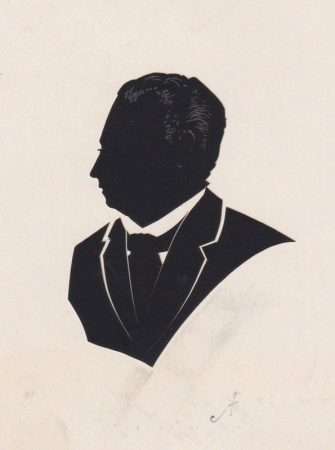 Silhouette of a man bearing the ‘AF’ monogram. The tie and lapels are indicated with slash cuts while the head has been embellished in pencil.

I found my first April Fielding silhouette about six years ago, but had no idea who made it. All I could see was a well-made silhouette or a middle-aged man, cut in two parts (something I’ve never  attempted) with details added to the head inpencil. I was immediately struck by the quality of the tie and the three-quarter presentation of the shoulders.

The silhouette was mounted on a blank English postcard, possibly dating from the 1900s and had the single letter “A” added in pencil under the silhouette. I now realise this reads “AF” but couldn’t see that at the time.

Since then I collected a number of similar silhouettes in various states of disrepair, but all clearly by the same artist. All are artistically interesting, but none told me anything new about the artist. Some had the same “AF” mark and some didn’t. I resigned myself to the fact that I’d probably never know abetting more about the artist.

This was a shame as his (or her, as it turned out) work seemed far better than the many other silhouettists who mounted their work on postcards at the time.

A visitor to my virtual studio

Shortly before Christmas I received a visitor at one of my virtual studio days wanting silhouettes of her children. They were to be a present for her partner. As I was cutting them I asked (as I often do) if she’d ever had her own silhouette cut out. Yes, she had. In fact, it was cut by me at a friend’s wedding some years ago. That was the reason she’d booked a sitting t have her children cut out too.

She also mentioned a pair of old silhouettes she had in a box somewhere. They used to belong to her grandmother and my silhouettes reminded her of them. Intrigued, I asked her to tell me more, but all she know was that they were in one of several boxes of old stuff she didn’t know what to do with. Well, we all have a few of those!

She promised to dig them out and send me a photo. Since she has two small children on her hands I didn’t expect her to actually do this.

Imagine my surprise when, a few days ago, an envelope arrived in the post with not a photo, but the actual silhouettes! They were of a man in a wing-collar shirt and a woman with a shite necklace (see top image). I immediately recognised them as being by the AF artist. I turned them over and there, on the back, was a label.

April Fielding’s label on the back of two silhouettes. One corner seems to have got burned somehow!

Labels like this are like an extra little gift to a silhouette enthusiast like myself. Somehow they always say more to me than just the text.

The label obviously tells me name of the artist, as well as where and when the silhouette was cut. However, it also tells me the artist was a woman and not a man as I had assumed (in fairness, the vast majority of silhouettists in the 1900s were men, unlike today – but that’s another story). April describes herself as a “silhouettistte”, thus emphasising her femininity. The label also tells me that April  worked at Crystal Palace long enough for it be worth printing a card especially for the venue. Most of her other silhouettes are mounted on unlabelled cards.

An accompanying letter said a little more. My visitor remembered that her grandmother kept these silhouettes in a drawer. Apparently she could recall them being done of her own parents when she was a child, before the Great War. They were cut by a tall, elegant but rather imposing woman. Her parents wanted her to have her own silhouette cut but she refused, being nervous of the scissors. This rings true to me, I’ve seen so many children do exactly that! It’s a comfort to know that silhouettists a hundred + years ago had the same problems as I do today. 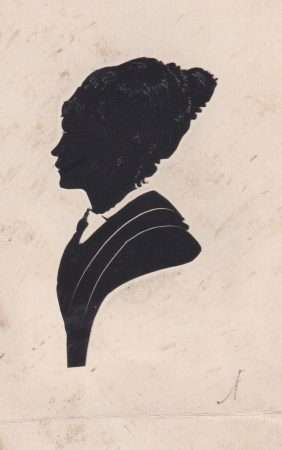 Silhouette of a woman by April Fielding

In the 1900s Crystal Palace was a popular destination for Londoners and anybody visiting the city. It was was the venue for a series of exhibitions and other events and many other, better known silhouettists worked there.

Baron Scotford was famously said to have unknowingly cut a silhouette of King Edward VII whilst he was visiting an exhibition at Crystal Palace. It’s therefore possible that April and the American Baron knew each other, although their work appears quite different.

I will continue to look out for April Fielding silhouettes and will update this post if I find out anything more. I really like her work and am especially interested in trying her two-part cutting technique for myself. All the way through my career as a silhouettist I find myself nudged in new directions whenever I discover the work of another historical artist.

If you’ve ever seen a silhouette with an AF monogram please do get in touch. I’d love to see a photo of it, particularly if it has a printed label on the back. 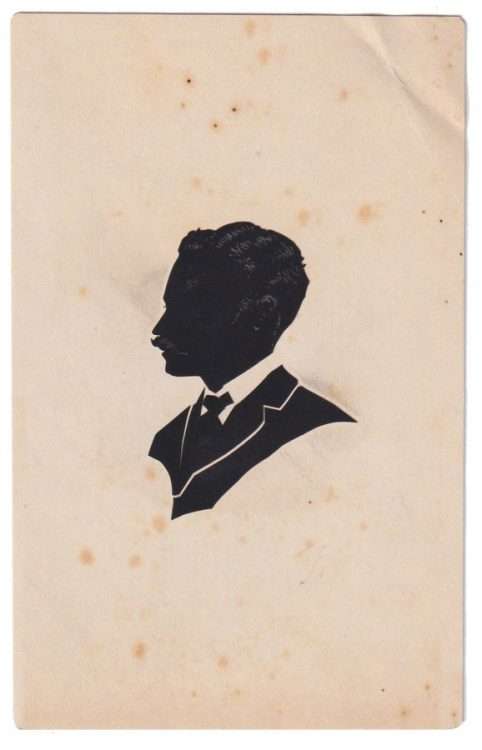