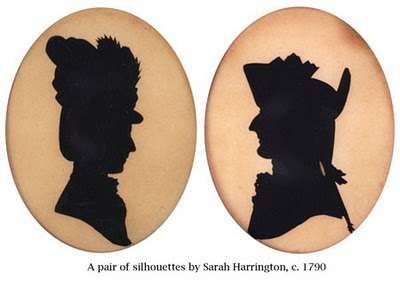 I recently came across the work of a talented silhouettist called Sarah Harrington.  She was a professional silhouettist who worked during the latter part of the eighteenth century.  What struck me about about her work (apart from her obvious love of hats) is that they’re all cut inside-out!

As a fan of Sarah Harrington’ silhouettes I run some of my virtual studio days in tribute to her. The most recent was on Wednesday 28th July 2021.

Inside-out cutting (or hollow cutting, as it’s more usually called) was a popular technique in early nineteenth-century America. However Sarah Harrington was working 50 years earlier and in England, so this was a surprise to me. The second surprise was the sheer quality of the work. Her single-line cuttings are really intricate, with a level of detail not usually associated with hollow cuts.

So who was Sarah Harrington?

She’s a curiosity, that’s for sure. Sarah appears to have been successful as an itinerant sillhouettist, working in towns and cities all over England and possibly also in Ireland. As well as making silhouettes she is known to have painted on silk, and to have published a number of books. These include a book on “new and elegant amusements” and an introduction to map reading.

Oddly, she managed to do all this while being married, which was not all what was expected of a wife at the time. Her husband, Thomas, is listed as a ‘gentleman’ which probably means he had inherited money and that Sarah had no real need to work. Yet, work she did, and very professionally. The advertisements which precede her visits to various towns show that she had a shrewd financial sense and priced her work to sell.

Could she become a modern feminist icon?

In 1775 she patented her own silhouette machine. Sadly I haven’t seen an illustration, but it would be fascinating. Sarah was an early exponent of hollow cutting, so her work can sometimes be hard to distinguish from later artists who copied her style and technique (especially from a Mrs. Collins, with whom she entered into a short partnership.)

Sarah cut silhouettes of many prominent people of the day, including King George II.

Cutting “inside-out” means that Sarah’s profiles are all cut as holes in sheets of white paper (now rather yellowed.) The shadow effect of the silhouette was then created by placing a black material, eg. silk, behind the cutting. As there are no entry lines cut into the paper she presumably began each silhouette by stabbing the paper with the points of her scissors. This counter-intuitive technique is quite tricky, but does make sense in an age when black paper would not have been available.

Many of Sarah Harrington’s silhouettes are backed with dark blue, rather than black paper. One advantage of this technique is that you can change the colour of your silhouette very easily. 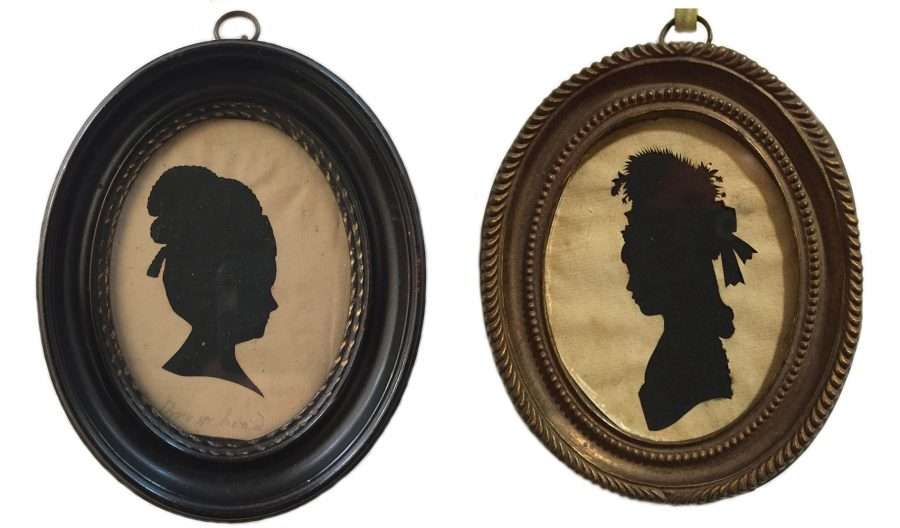 Two of Sarah Harrington’s silhouettes in my collection. These are in poor condition but the intricate zig-zag of her scissors work can still clearly be seen.

How easy is it?

Ever curious, I’ve been experimenting with the technique myself. I find that the main problem is to turn the scissors freely, meaning I need to insert the scissors alternately from above and below the paper, depending on which way I’m turning them. Strangely, the natural direction of the profile is reversed. Right-handed artists  usually find it easier to cut the right profile. However, when hollow cutting, the reverse is true: it’s easier for right-handed artists to cut the left profile.

Some things are easier. For instance, I find I add eyelashes and stray wisps of hair after cutting the profile. By cutting into the profile I can add such details outside the line, but cannot (or course) cut away any details to make the silhouette smaller. Again, this is the exact reverse of the usual cutting common sense.

Of course I’ve no idea if this technique will ever have a commercial application. Perhaps I’ll get booked by a modern day manufacturer of black silk? I so, this would be the perfect way to make silhouettes out of silk. Do you perhaps have any other ideas about how to revive this ancient profile technique? 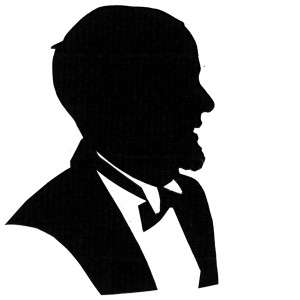 Previous: « Caversham Arts Trail: Once a year I become a cat
Next: A silhouettist’s approach to data protection »