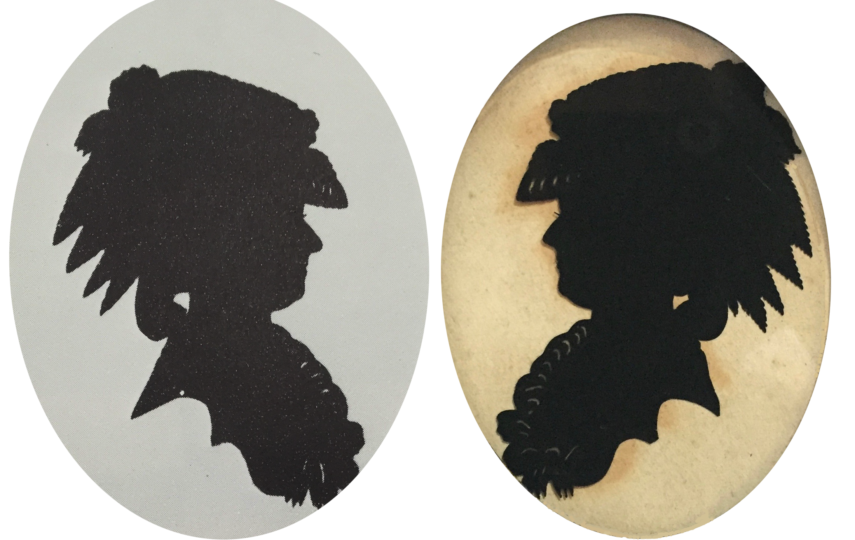 A silhouette of Marie Antoinette

Last Wednesday I picked up an eighteenth-century silhouette by Isabella Beetham. Beetham is a well-known Georgian artist and her work is much prized by collectors today. She is something of a feminist icon. She is one of very few eighteenth-century female artists to build a successful career in the male-dominated art world of her time. The silhouette was sold by auction, part of the estate of a well-known collector and art historian. I had been lucky enough to place a winning bid. My new Beetham silhouette is a Georgian lady in a large and fashionable hat. She is cut from black paper and pasted onto a once-white piece of card (now yellowed from exposure to daylight). She faces left and sits in an oval hammered-brass frame, typical of the period, measuring just 4” x 3”. The size of her hat makes her look slightly squashed in. Personally, I would have given her a bit more space by using a larger frame.

The silhouette was described as “attributed to Isabella Beetham”. This means it lacks a signature or any kind of trade label, but looks a lot like other silhouettes by this artist.  Since the silhouette came from a well-known collection I trust this attribution. However, as soon as I got it home, I sought to verify it by opening my copy of Sue McKechnie’s tome “British Silhouette Artists and their Work, 1760-1860” and looking for other silhouettes by Beetham.

There are two possible explanations for this. The first is that, 235 years ago, Beetham was employing the same trick used by silhouettists today. She placed two sheets of black-faced paper together, black side in, and cut two silhouettes at once. This results in two copies facing in opposite directions. The minute differences are due to the paper moving as she cut. Any silhouettist will tell you that this can be a problem, however tightly you hold the paper. The two sheets can be secured together with sellotape (Beetham would have used small spots of glue at the corners) but as you cut around the head the two sheets become progressively more and more separated. They begin to move, resulting in minute differences between the two silhouettes.

The second possible explanation for these differences was suggested to me by the name of the sitter. Marie Antoinette (1755 – 93) was Queen of France from 1774 until the French monarchy was abolished in 1792, during the French Revolution and shortly before her execution by guilontine in 1793. Such a royal and famous sitter would have been important for Beetham. It’s likely that she kept a second copy for herself (using the trick described above) and used it to make further copies. She could then have offered reasonably-priced silhouettes of Marie Antoinette to anybody who cared to buy one! If this is true my silhouette could be one of many Marie Antoinettes out there, but we will only ever know for sure if a third copy comes to light!

If it is true (as I suspect) that these two silhouettes were cut at the same time, then this more-pleasing shape tells me that my copy is the top copy. This is the copy the artist was actually looking at as she cut the profile. The McKechnie-illustrated copy is the one which moved, relative to the top copy, during the cutting process. This in turn tells me that Beetham was right handed. I infer this because my copy, which faces left, would have faced right as Beetham cut, since a silhouettist always looks at the white side of the paper. In general it’s much easier for a right-handed artist to cut a right-facing profile, while for a left-handed artist the opposite is true, so Beetham must have been right handed.

It’s quite possible that Beetham had a profitable side line in selling Marie Antoinette copies. Now that I own it I can of course offer the same service. If anybody would like a silhouette of Marie Antoinette (or, come to think of it, any celebrity you like) please do get in touch.

3 comments on “A silhouette of Marie Antoinette”

Previous: « The European Art of the Silhouette
Next:  Mixed-media Building Silhouettes »