IVE BEEN RECIEVING a number of enquiries about dinner parties, or small meetings, for 20 people or less. One particular event organiser, who called after a client had asked her about silhouettes, was understandably skeptical:

“They’re only expecting 12 guests” she said

Laughing, I explained that although I can cut a silhouette in just 60 seconds I’ve never found it obligatory to do so! Lately I’ve started to really appreciate smaller events, at which I can slow down a bit (taking as long as three or four minutes per cutting) as well as having the chance to talk more and really get to know the people present.

A proposal for a post-meeting silhouette workshop

Another client, calling about a conference with just 10 delegates, asked me if I could run a silhouette workshop; at that, the penny dropped…

The proposal I’m about to put forward for that event so intrigues me that I thought it worth sharing:

Shortly after arriving for drinks, after a long and productive meeting, the delegates are met by an artist who introduces them to the eighteenth-century craft of silhouette cutting. Asking for a volunteer to model he cuts a portrait from paper, freehand with scissors, talking the audience through the two-minute process as he does. Afterwards the delegates are invited to each find a partner, while scissors and paper are distributed among them. They then have two minutes to cut their partner’s silhouette, before changing places so their partner can have a go at cutting a silhouette of them.  After some minutes each is holding a pair of silhouettes (although sadly few are great works of art) which are then mounted onto card and passed around the room to the sound of general hilarity.  The whole process takes about 15 minutes.

Later on, after the delegates are seated for dinner, the artist circulates the room cutting portraits for all to take home as a souvenir of the day. The portraits are quite detailed, with some caught holding glasses or gesticulating with a fork, while others are gently caricatured.  A few – for those brave enough to stand and pose – are cut in full length.

What do you think?  Of course this is only a sketch for one event, on another occasion it could also work if I cut their silhouettes first and run the workshop afterwards. However, the general idea of silhouette workshops does seem to have possibilities. Until recently I had assumed a silhouette workshop would be limited to team-building events and art societies, while now I’m wondering if they have a wider application.
. 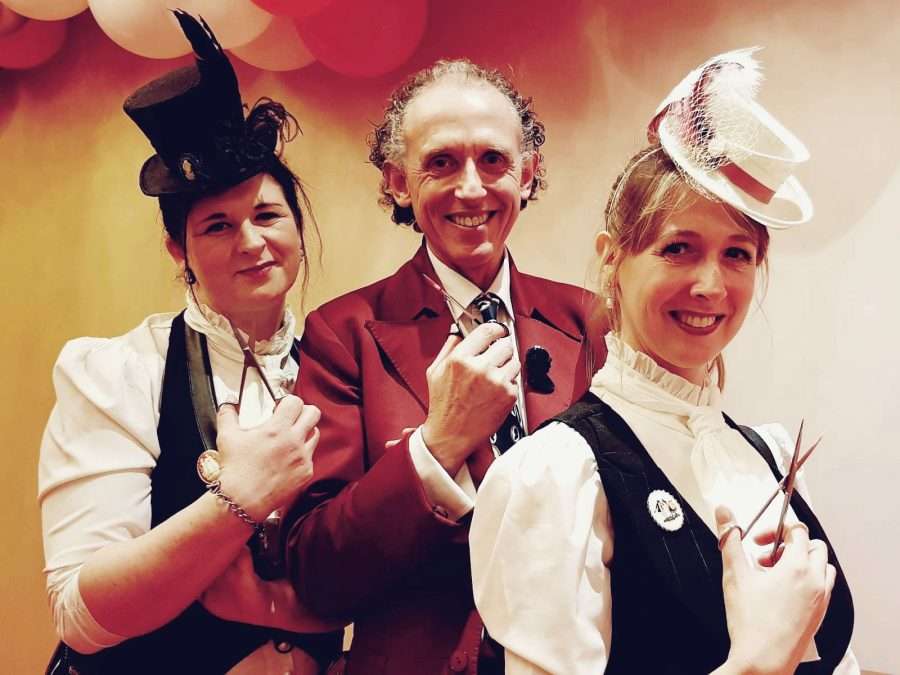 HOW MANY WAYS cut I cut a silhouette? To be honest, I’ve let count. Soon after I cut my 50,000th silhouette I realised repertoire was…

Having been in the party planning industry for over 20 years, Charles continues to re invent the wheel. It seems there are no boundaries as to his skill with a tiny pair of scissors and literally seconds of your time as he cuts your silhouette. We are always putting forward this skill at parties as it still wows guests every time and its a keep sake to hang on the wall next to Great Aunt Gertrude’s original. I have also worked with other silhouette artists, but only to find that they have been taught the craft by Charles too! Of course they have!!!
Try Charles for yourself at your next event, he doesn’t take up much room, works the floor brilliantly and you seriously wont be disappointed.

Michael & I once worked at a training conference with the theme: “The Shadow you Cast”. It was about that very subject. Our silhouettes were intended as a light-hearted pun on the theme.