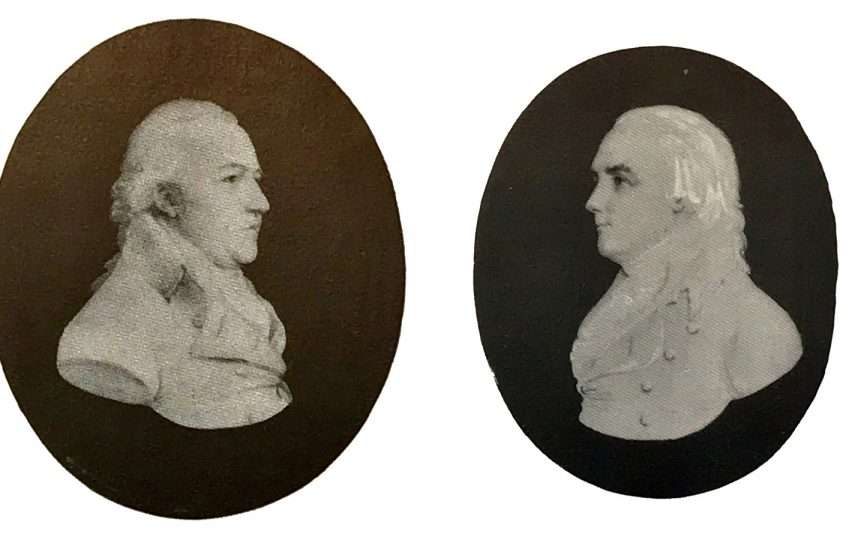 Each is named after a historical artist. These are the last silhouettists I know beginning with the letter ‘A’. You can book sittings here and read about the artists below.

Sittings from 6am to noon UK time

Sittings from 9am to 3pm UK time

Here are the artists I’ named my studio days after this monh.

Just to avoid any confusion, this does not mean I’ll be cutting silhouettes in the style of these artists! I’ll cut your silhouettes in my own style, of which there are many examples all over this website.

However, if you’d like me to cut your portraits in the manner of any artist please ask. I always love a challenge!

Samuel Andrews’ en grisaille portraits occupy that strange overlap between silhouettes and portrait miniatures. Technically, a soon as you paint the face, you are no longer working in silhouette! He was one of the artists I looked at while developing my own range of en-grisaille portraits.

Samuel Andrews was born in Ireland, but began his career in Bath, England around 1780, aged just 13. He continued working until his death in 1807 at the age of 40. He spent much of his short life in India, having moved there in 1791. This is where he produced most of his portraits, many of whom depict members of the British elite in India.

After his move to India he became a follower of John Smith, a miniaturist working there at the time. he worked initially in Madras before later moving to Calcutta.

Samuel Andrews is mostly known for his en-grisaille profiles. These demonstrate an extraordinary attention to detail, particularly in his use pf highlights and shadows. He painted his backgrounds in a dark brownish grey, and used a thinned version of this to paint face and clothing details. He also used white paint to add touches of light to his sitters’ hair and clothing. His style developed over his surprisingly long career, with obvious improvements in his depiction of dress by the early 1800s.

It’s entirely possible that no such silhouettist as Ardrossan ever existed! What does exist is a single, oddly-styled  silhouette signed Ardrossan and dated September 1837.

The silhouette shows a young woman with a white bonnet and shawl. She has pale blue ribbons to tie her bonnet and other details picked out in white and gold.

Ardrossan is the name of a town in North Ayrshire, Scotland. It’s therefore possible (some would say likely) that the ‘signature’ tells us where it was painted rather than the artist’s name!

However, you don’t see many nineteenth-century silhouettes with place names added like this,, so it does look like an artist’s name. Is this just wishful thinking? Quite possibly! It could even be the name of the sitter…

The silhouette is in a standard black frame with a brass oval ring. There’s no label or other nark to give further clues.

The artist, whoever they were, painted this young woman’s profile in dark grey on card, leaving out her bonnet and pèlerine. They added detail here in thin watercolour, and painted the ribbons in pale-blue.

The signature (if that’s what it is) is written neatly inside a pale grey shadow line under the bust. As a silhouette, it’s a stylistic oddity, all on its own. This only adds to the mystery.

What can we learn?

The 1830s was a good time to be a silhouettist. There were many artists, often itinerant, plying their trade all over the US and UK. Photography was still to be invented and plenty of people wanted silhouettes.

It’s likely this portrait was painted by an artist who tried their hand at being a silhouettist before giving it up for something else. Was the artist really called Ardrossan? Who knows! Until another silhouette bearing the same signature turns up, nobody will ever know.

George Atkinson was a prolific artist, well-known by collectors of silhouettes. In his advertisements he claimed to have painted over 900 profiles. Judging by the quantity of them which turn up, this is likely to be an underestimate.

I don’t know much about Atkinson’s background. He seemed to have had a successful silhouette practice in London and also visited seaside resorts (especially Brighton) during the summer season. He made good use of trade labels, which he stuck on the back of his frames

Like many silhouettists of the time, George Atkinson was not adverse to copying old silhouettes, or painting in the style of other artists. He did this so his silhouettes would “match” those already owned by his clients. However, if the trade labels become detached (as they often do) it makes it tricky to attribute his work.  For this reason, some of his work has been misattributed to others. Later in the nineteenth century, some artists even coped him!.

George Atkinson styled himself as a “drawing master” and a “painter in watercolour”. He also mentions his work for the Royal Family, have made a silhouette of the Prince Regent.

His early portraits were painted in plain black with white highlights. He went on to paint much more lavish profiles in gold against sepia and black. He always used plain black for the face as well as in brushstrokes to indicate shadows on clothing.

His bust lines are usually fairly straight with a point at the front. These, together with an analysis of his use of paint, are the best way to identify a George Atkinson silhouette which has lost its label.

If you Google “Audax” all you’ll find is information about long-distance cycle racing. Audax was also a silhouettist with a career spanning over 40 years. This is why I refer to him as a long-distance silhouettist!

As a street artist I’m fascinated by artists like Audax. He (I’m assuming ‘he’) was a European silhouettist who worked all over Europe, and later in Argentina, from the early 1900s until the late 1940s.

For somebody with such a long career it’s surprisingly hard to find out anything about him. Was “Audax” even his real name?

The little I know comes solely from his silhouette backing cards. Usually, these just include a signature or stamp. However, they occasionally carry details of the location or event where he was working.

I’ve no idea what he was doing between those dates. Did he come back to silhouette cutting later in life, or did he make thousands of unsigned and unidentifiable silhouettes for the bulk of his career?  He clearly worked as a street silhouettist at various European seaside resorts in the 1900s. Did he travel to South America to escape the destruction of Word War I, or perhaps migrated there afterwards?

Audax silhouettes are all freehand scissor-cuts. I think he worked fast as the quality of his work varies considerably. His earlier silhouettes seem smaller and neater than his later ones.

Previous: « Are silhouettes the perfect socially-distant art?
Next: December Studio Days from Battenham to Barber »