IN THE YEAR of the DIAMOND JUBILEE I was invited to cut silhouettes over lunch at a marquee in Coworth Park. It was one of the only events I’ve attended where the toastmaster had to announce lunch by calling for “Your Majesties, Royal Highnesses, Highnesses, Lords, Ladies and Gentlemen… ” to take their seats.

This was not my first royal event, in fact I had already twice cut a silhouette of the Queen. The first time was at the “Golden Jubilee rout” in 2002, the second at her 80th birthday party, held at the Ritz in London in 2006. At both these events no photography was allowed, apart from a single royal photographer. I was therefore surprised when Hello! Magazine suddenly published a series of photographs of the latter event – in their Diamond-jubilee souvenir edition – showing me cutting the Queen’ silhouette. They had apparently been released to the press by the Palace as a Thank-you for the work I did at Coworth Park. It had never occurred to me these photographs would see the light of day, still less that they might do so six years after the event!

Here are the photographs which appeared in the Jubillee edition of Hello! Magazine (issue no 1229, June 2012). They show the Queen having her silhouette cut during her 80th birthday party at the Ritz, London. I’ve added my copy of the Queen’s silhouette, together with one of the Duke of Edinburgh cut at the same event. From right to left:

I’m told the silhouette was a great success. Lady Elizabeth Anson, who organised the event, writes:

“The man is a silhouettist called Charles Burns, who cut out the images with a pair of scissors. I love the way the Queen takes off her glasses, then happily shows everyone the silhouette at the end of it.”

This is also my recollection of the event. People kept coming up to me afterwards and saying:

“The Queen really likes her silhouette!”

Where do I go from here?

This might just be the most high-profile event I’ve ever attended. I found myself wondering: where do I go from here?

I needn’t have wondered. 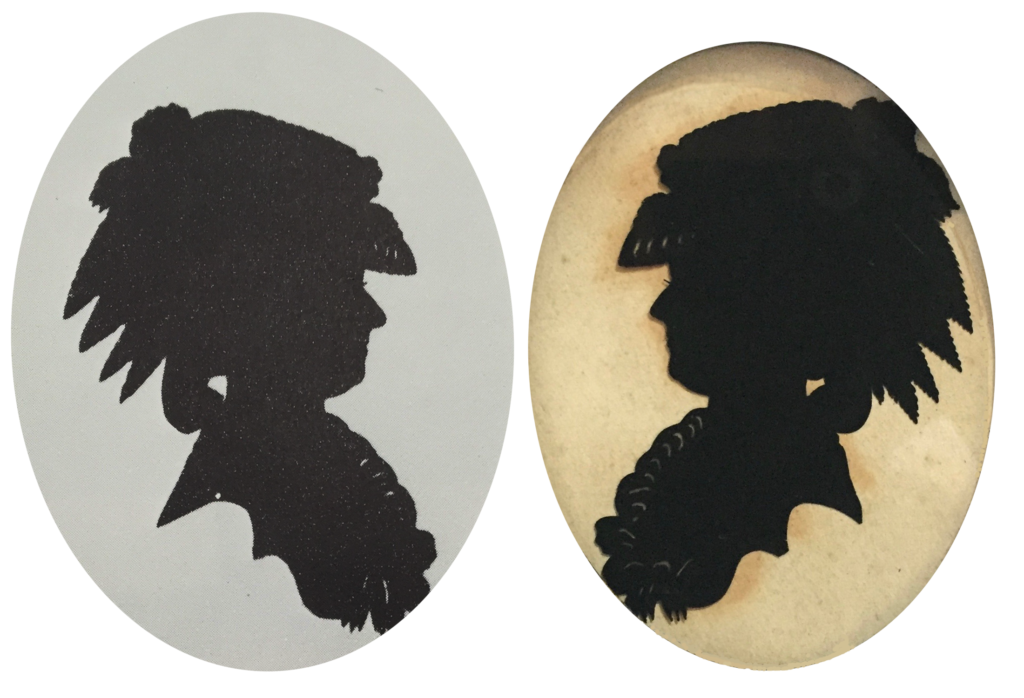 LAST WEDNESDAYI picked up an eighteenth-century silhouette by Isabella Beetham. Beetham is a well-known Georgian artist and her work is much prized by collectors today.…

I LOVE this story, is brilliant that my good friend Charlie has cut the silhouettes of our lovely Queen twice now, along with many other famous people. My dad loved him at our wedding because of the amazing blue jacket he wore, which meant my dad could see him, he is as friendly as he is here. I will have to find and post the silhouettes I have. Charlie has just made a documentary film which has won awards and I’m hoping he’ll win many more, and off course Cornwall has lots of art festivals, lets hope they show the film here and we’ll get chance to meet up. Congrats Charlie on all your achievements, I’m really pleased for you. xxx

The queen’s children & grandchildren would be a delightful record!

To Ascot on race day of course, not only people but profiles of horses too !!!!!!

Thanks Niki. I have been booked at Ascot, but never to cut horses. A famous nineteenth-century silhouettist called August Edouart did a lot of these. He claimed that horse profiles were each just as individual as human profiles. I wonder if that’s really true?

Grace here. First I will contact you about a CB silhouette. I call what I do “the Sledgehammer”. The secrets of the trade are as guarded as the plans for a missile guidance system. Your kind offer of help was the first I have had for anything in a long time. I cannot tell you how touched and grateful I was when I received it Thursday. But as of today I may not need it, please email me when you get my second letter. GM

Your comments are as mysterious as said guidance system plans, but I’ll make sure to cut your silhouette – sledgehammer in hand!