IS IT POSSIBLE to make a caricature likeness in silhouette? This question vexed me for many years.

As soon as I saw her work, I realised this was the artist who appeared to cut portrait and caricature silhouettes at the same time. How did she do it?[/callout]

They were laughing. I mean, they were really laughing! They found my work hilarious. Looking at the off cuts later I could see why, I was making completely a different kind of silhouette. They really were caricatures..

Five caricature figures cut at various events in and around London last year.

The man with the hat later opened a bar in Brisbane. He liked his caricature so much he used it his logo there! 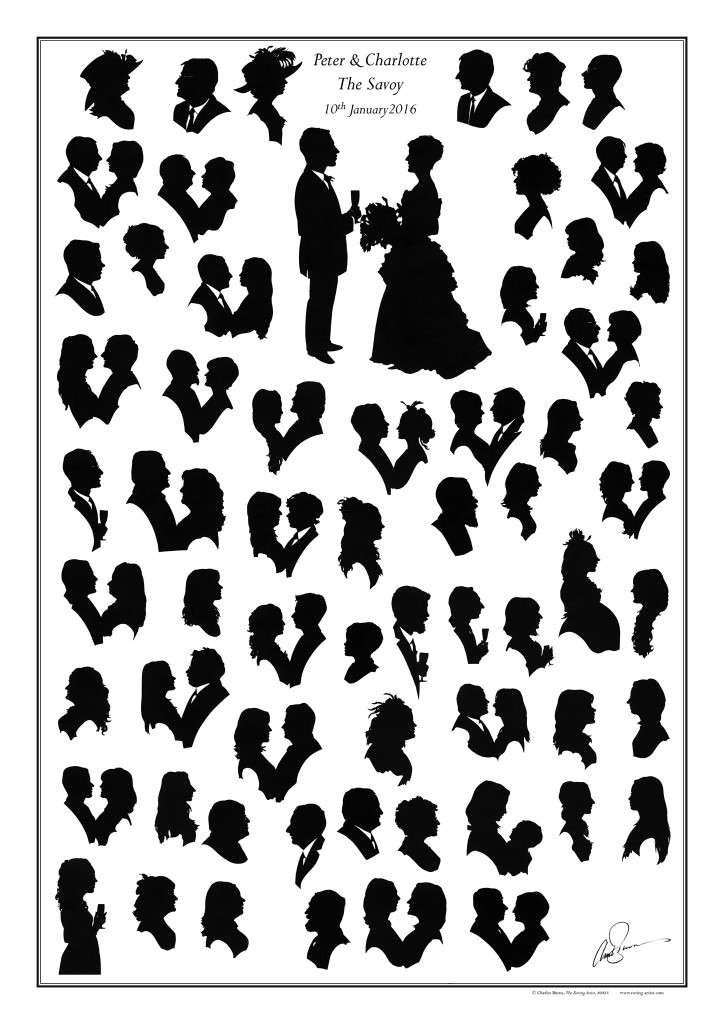 SILHOUETTES are all about memories. Of all the things I do as a silhouettist, one of my favourites is to create a collage-style print of… 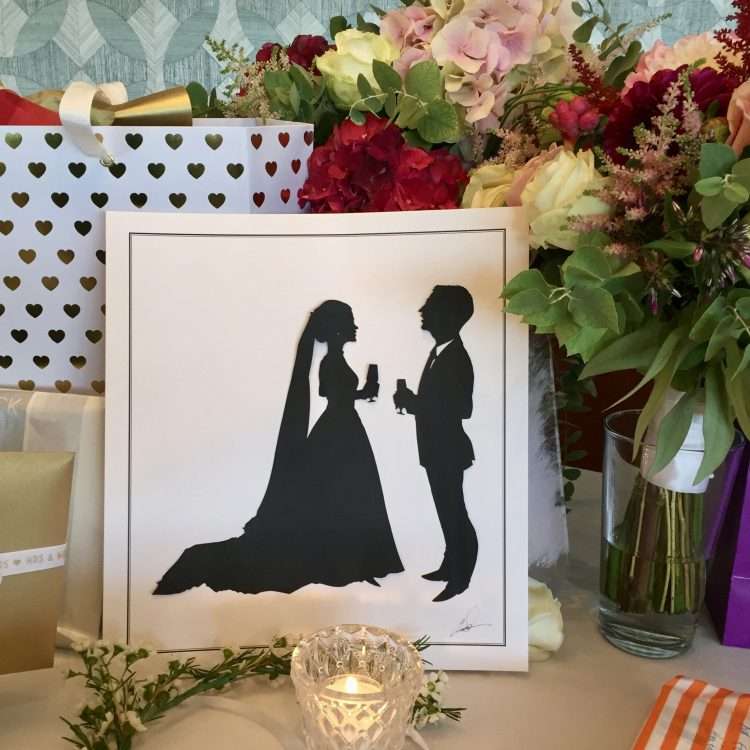 SENDING A THANK YOU to all who attended your wedding is a lovely tradition. How about sending your own silhouettes, created on the day, to…

I loved my silhouette and am still astonished at the speed and accuracy.

I have my silhouette framed as did my son, his partner and my partner. Amazingly good likeness, a fantastic artist and a magician with scissors! Thank you Charles. Ps. A fascinating article. Best wishes Suzy (The Livery Company of Tinplate Workers alias Wireworkers)

Thank you so much Suzy! Charles and Michael really enjoyed your wonderful event.
Best wishes, Lauren

I find Charles’ silhouettes utterly compelling and it never fails to amaze me how he continues to develop the art form and find so much background/historical information. All fascinating stuff!

I am more and more amazed at the variety of your work. I love reading about your adventures into new forms of your artistic endeavours. It is fascinating reading about all the different artists and their techniques. Thank you and congratulations.

Always find your comments not only interesting, but also informative and amusing … keep them coming!

We had charles himself at our wedding on 24 August 2019.soo good everyone still talkes a out it and have pictures framed a d up.i enjoyed reading your email you all have such a talent thank you again for a good service a d fantastic wedding guest gift worth every penny Alva keatley

i thoroughly enjoyed reading your comments about caricature. It is fascinating. We first met when my husband, who is Scottish, were in England visiting family. I used the silhouette which you did as a logo at his 75th birthday party. We live in Canada and I only wish that you lived on this side of the ocean.

Thank you Joyce. Don’t let the small matter of an ocean put you off. Id be very happy to attend an event in Canada!

Very interesting feature. I have yet to see you in action! Of course, you do not give away the secrets of your talented skills.

I hope there’ll be an occasion for me to cut your silhouette soon!

Talented artist who makes a great addition to a corporate event!

Fascinating article. Like your work, short,sharp and to the point but with rather more if you take the time to look. Thank you and I look forward to seeing you again mid April.

I have always found your “Silhouette Essays” very interesting, but this one is Fascinating! Partly because – for me – Caricatures of all sorts (with possible exception of some political ones) seem thoroughly spooky. I think of the tortured faces of tourists on the port in Saint Tropez and shudder!
Well your final 5 caricature silhouettes are terrific…..not spooky at all; one can actually see these “cocktail” people in colour. Congratulations on your perseverance, as well as the caricatures, and also for writing it up so well. Am most impressed by your endless creativity……..
So – where will you go from here? As you have now explored Silhouettes from every angle (?) you could maybe publish your collection of essays? Alternatively you could start making some of your caricature silhouettes move ….? I can imagine a clip of those “cocktail caricatures” in full boozy action – as an Advertisement for Black & White whisky par example…….

Thank you JO, as always! I like your idea of moving caricatures and will give it some thought. Watch out for another update…